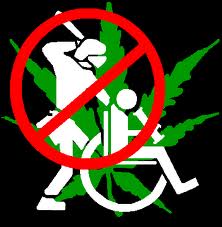 Anyone who has dealt with MS knows it is basically a game of gradually increasing piles of drugs.
Disease-modifying Drugs (DMDs) - which we think do something.
Anti-spasm drugs- which may not help spasms until you are passed out
Drugs to keep your sphincters closed
Anti-depressant drugs: which make you dizzy and confused
Anti-pain drugs: which knock you out
Drugs to counter the effects from the above drugs, which include vertigo, incontinence, weakness, sadness, poverty, etc, etc.

Well, maybe not those last two...

It is always tempting to just toss the drugs away and try to manage the illness without them. A few muscle spasms will teach you to rethink that; the inability to walk will make you grab your DMD needle like a heroin addict and gratefully shoot up in the hope that you can still stagger a little while longer.

And then there's the illegal drug, that always makes me feel like I'm making a pumpkin spice latte or something. The one requiring grinding and special machinery and inhaling. The one that, surprisingly, works, eliminating muscle spasms quickly, without the cheery side effect of me peeing my pants, a freebie with the other antispasmodics.

But I need special permission to have that drug. So I'm starting the effort, with the support of my doc, to get some legal stuff. It's a bit frightening, given that our current government finds it more evil than outright murder. I have to send them passport-type photos, and become officially registered, which I wouldn't have to do if I had a long gun. Odd, no?

HA - this morning my sweetie asked me why I had such difficulty getting from the couch to the bed. "Was it the drugs", he asked?